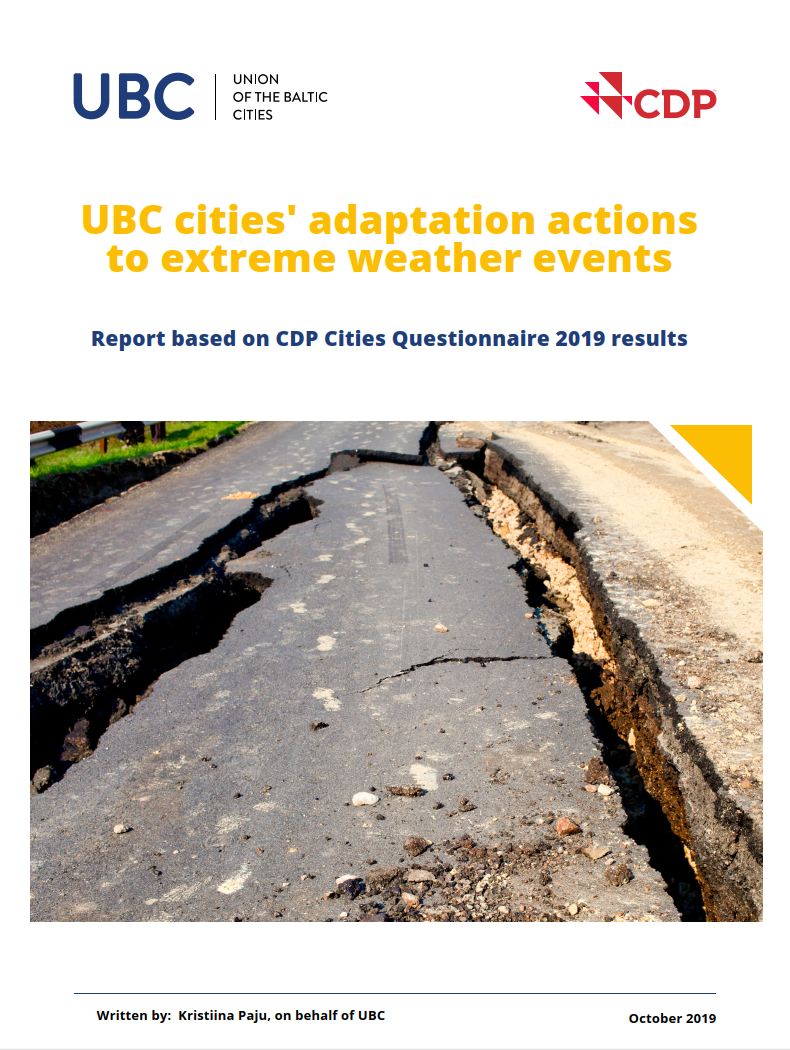 The disclosure period took place from 15 April to 31 July 2019 during which UBC cities were encouraged to submit their city’s climate change-related data as well as examples of actions that are being taken for climate mitigation and adaptation.

Altogether 26 UBC cities disclosed to CDP, 25 of them publicly:

Some of the key climate hazards that manifest in extreme weather events were identified by the UBC cities as follows:

The report itself has been structured in a different way to answer our member cities’ needs of getting examples of concrete actions and what other cities in the region do and think regarding the five climate hazards – with the focus on extreme weather events and the adaptation actions that UBC cities are taking to cope with the impacts. Another focus point was city infrastructure – how different extreme weather events impact the urban environment that we live in.

“In recent years, there has been an increase in the number of heavy rainfalls, and the intensity of rainfalls (water volume) has also increased. So far, rainwater has primarily caused problems in transport and the movement of people with reduced mobility (flooded street sections). However, so far, no significant damage due to rainwater has occurred, but the risk is increasing as the tendency continues.”  - Estonian city

“Flooding in houses, factories and warehouses in low level areas in town and smaller urban areas. This will probably be much worse in the future with assumed climate changes with more intensive rain (after periods of drought).” - Swedish city

“Heavy rains are expected more often and that can create urban floods. Stormwater floods damage infrastructure and properties. They can also pollute groundwater and surface waters. In agriculture, the crops will fall, the nutrients and pollutants start moving to waterbodies and have eutrophication impact or polluting impact. So, water protection and groundwater protection measures are needed, and the costs of management will rise.” - Finnish city

Report presented during the UBC General Conference in Kaunas

UBC Sustainable Cities Commission Meeting was held during the first conference day with the focus on mainly Commission-related issues and updates. The CDP report was presented by Kristiina Paju and the discussions and comments that arose from the audience after the presentation were valuable – from the oritentative time that filling in the CDP Cities Questionnaire takes to the need of a practical guideline to how to get different departments to work together to collect and disclose data.