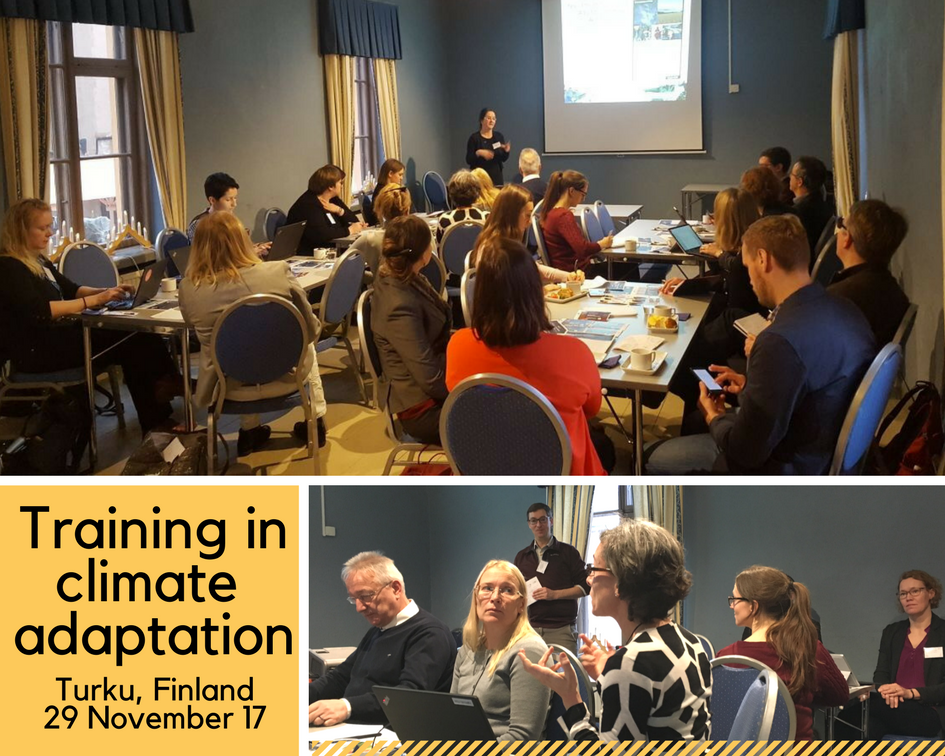 Training cities in climate change adaptation is crucial in the light of high risks posed by the climate change in the Baltic Sea Region. In the end of November, three workshops were organized in the region in cooperation with organizations SIWI and Baltic Development Forum to answer the needs of addressing risk-assessment methodologies and existing measures of adaptation.

One of the workshops from this series was organized in the city of Turku, Finland, on 29 November 2017. During the event, national, local and international speakers presented excellence of their countries, cities and organizations in working with tools for climate adaptation. Many methodologies, approaches and measures were presented and discussed throughout the event.

The training started with a presentation of Finnish National Adaptation Plan by Saara Lilja-Rothsten, senior advisor in the Ministry of Agriculture and Forestry. Ms. Lilja-Rothsten presented the climate change adaptation strategy that has been developed and improved in Finland over the years, and the Adaptation Plan aimed for 2022. Many important issues have been raised during the presentation and the following discussion. Among those, addressing vulnerability of cities and risk management in adaptation methodologies, creating synergy between existing strategies, and developing indicators for calculating the adaptation progress and incorporating this work into city budgets.

In the climate change adaptation work, it is important to emphasize the role of bottom-up methodologies. While top-down assessments define problems, bottom-up methodologies understand the process, take into consideration vulnerabilities, and establish solutions. During the training, John Matthews and As Jeuken, specialists from AGWA – Alliance for Global Water Adaptation and the research institute Deltares, presented several methodologies (World Bank Decision Tree Framework, Eco-engineering Decision Scaling (EEDS) and CRIDA – Collaborative Risk informed Decision Analysis) that can be used to minimize uncertainties in the planning process.

During the implementation of adaptation measures, it is important to collaborate with relevant actors. The trainings were particularly focused on local decision-makers, and many representatives from Finnish cities and municipalities contributed to presentations and discussions. For the presented local cases, the event featured the cities of Helsinki and Pori.

From the city of Helsinki, Kajsa Rosqvist introduced the storm water management strategy of the city and the process of its development. Among other points, Ms. Rosqvist emphasized particular obstacles that were formulated through the stakeholders involvement process during the strategy development: lack of information and awareness, unclear responsibilities, lack of resources. Solutions were then developed to all these challenges, and the new storm water program will be soon launched.

In Pori, the climate change adaptation is crucial for sustaining the city. Local measures in adapting to changes were presented by Matti Lankiniemi. Pori is located on the sea and the river, and it regularly experiences flooding: ca. 1/3 of citizens live in the areas where flooding is possible. Mr. Lankiniemi introduced both adaptation and mitigation measures applied in the city: usage of green energy, reduction of waste and recycling, and many others. Several practical measures listed in the presentation, such as storm water reservoirs and retention ponds, attracted attention of smaller municipalities with limited resources for implementing climate adaptation strategies in full.

The regional dimension of the climate change adaptation was addressed through the project iWater, Flagship of the EUSBSR. This project aims to improve urban planning in the cities of the Baltic Sea Region by developing integrated storm water management system. Nika Kotoviča, representative of the city of Riga, introduced challenges of urban planning, and tools of addressing them.

The training in Turku brought together active and enthusiastic specialists from local authorities with providers of methodologies to listen about urban challenges, discuss existing tools and share the experience on working with them. It is extremely important to exchange knowledge in this field, both to contribute to adapting cities to the climate change from below, and to include the named issues to the national adaptation plans and strategies.

Presentations from the workshop