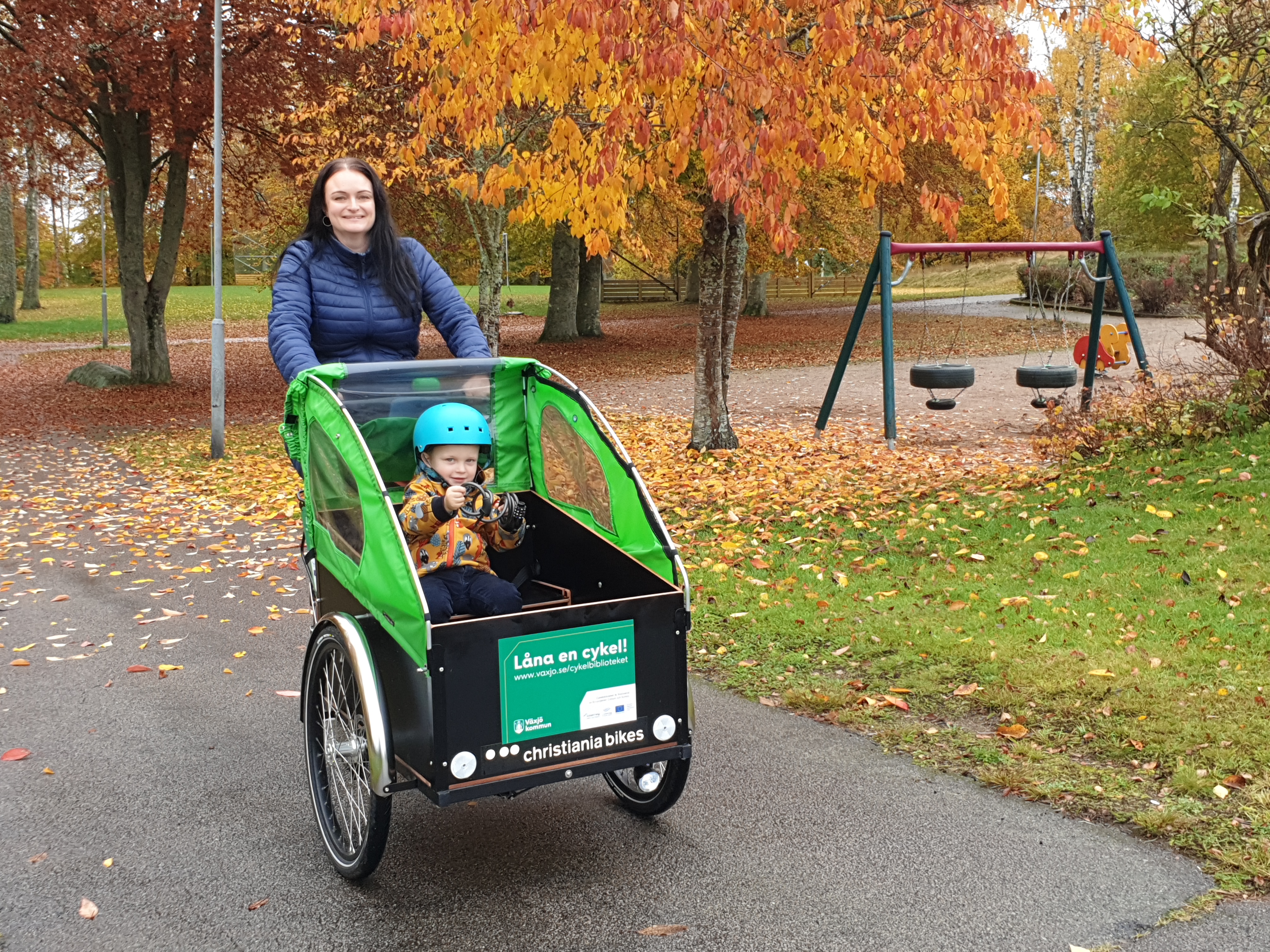 Fotbroms: a word synonymous with bicycle culture in Sweden. It means “foot brake” and like strawberries to midsommar, fotbroms is a necessary component of the type of bike most commonly sold in the country: “grandma bike” or “city bike”.

While the simplicity of the “grandma bike” is attractive for many, the fact is that this bike can be limited when travel extends beyond shorter distances on flat, nicely paved bicycle paths. Factor in heavy shopping bags, children, gravel roads or a retired washing machine destined for the recycling centre and the “grandma bike” is no longer considered a viable mode of transport. Cue the bicycle library.

The bicycle library (cykelbiblioteket) in Växjö was inspired by a service with the same name in Copenhagen, and started as a pilot with financing from two EU projects: SUMBA (Sustainable Urban Mobility and Commuting in Baltic Cities) that aims to promote sustainable mobility and intermodality in transport planning, and CoBiUM (Cargo bikes in urban mobility) that aims to promote, as the name suggests, the use of cargo bikes in commuting and goods transport in urban centers.

The project opened in April 2019 with 21 different bikes that residents of Växjö could borrow for a three-week period. The goal was to provide residents with the opportunity to try cycling in a different manner in the hopes that they would find the right type that best suited their travel and transport needs, and to develop Växjö’s bicycle culture, thereby reducing car dependence and car travel. Bicycle types included cargo, electric assist, folding, and gravel - all different makes and models. 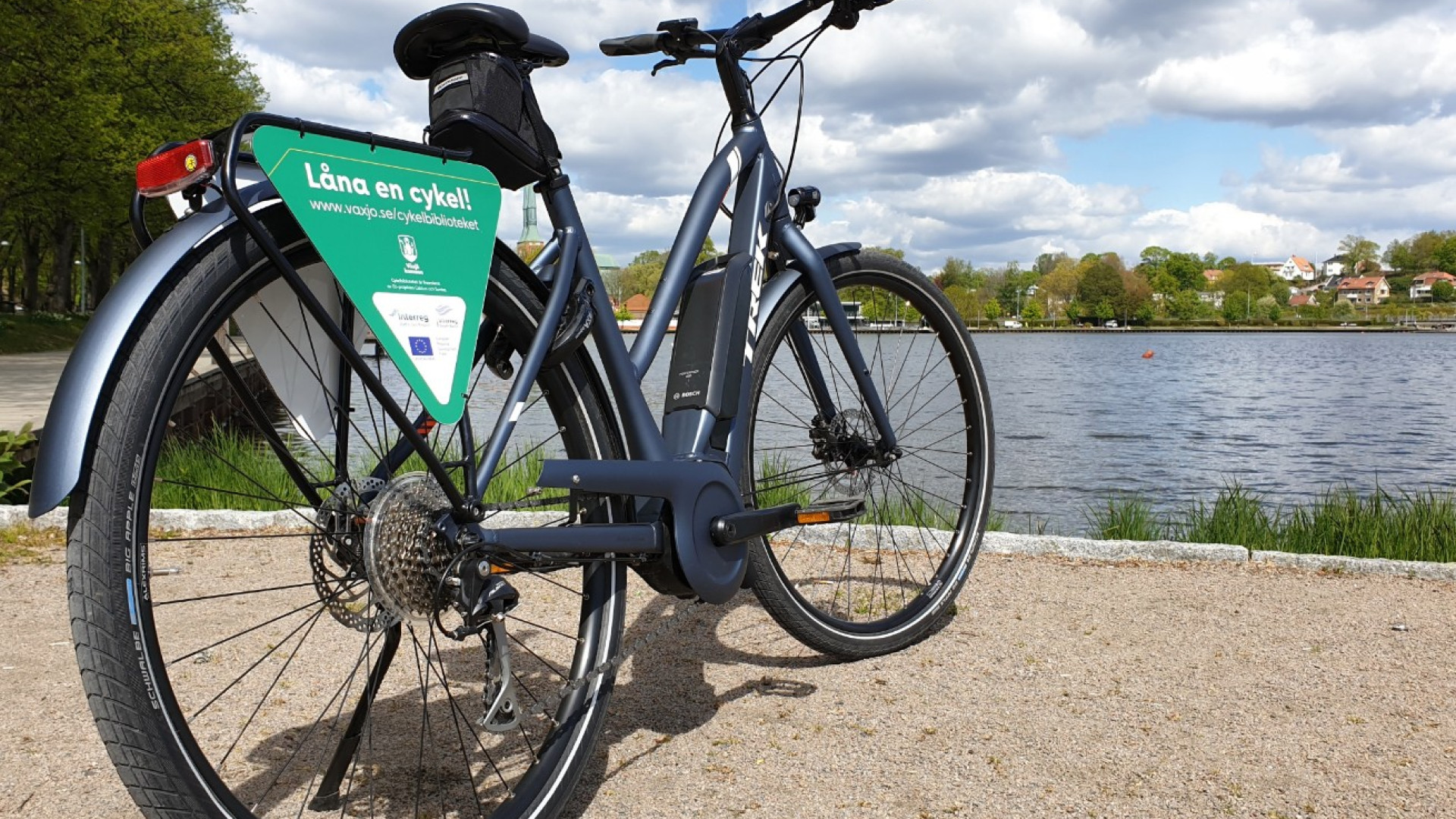 Several breakfast meetings and brainstorming sessions with the bike shops and other local stakeholders helped to develop the project idea and to identify bicycle types and specifications for the procurement process. Industry and technological trends and relevance in the Växjö context were among the discussion topics.

Outside the city center, Växjö is a rural municipality with longer distances and oftentimes gravel roads (including abandoned railway lines) connecting villages and the city together. Electric assistance with powerful motors, long-range batteries, disc brakes and fatter tires were therefore prioritised on many of the bikes in the library. For the record, only two of 24 bikes had fotbroms.

Four local bike shops loaned the bikes and serviced them between bookings. Bookings were made via a custom booking system built into the municipality’s website where lenders can find information on and availability of the bikes in the library, as well as the terms for borrowing.

Only two days after the opening event in April, all eight pre-defined periods were fully booked including right through to the colder months of November and December. That was a total of 168 bookings in two days, with cargo bikes and electric assist being the most popular. In addition, positive feedback from a participant survey further confirmed the demand and necessity for such a service in Växjö.

In the survey, 141 respondents reported they could reduce car travel for commuting, transport of goods, travel with children or a combination of the three. Of the participants, 39% said they were considering purchasing the same or a different model.

Some participants reported that they would prefer to test other models before deciding, particularly cargo bike models that can cost between 4000 and 7000 euro. Others preferred to lease a bike, a new service further developed at one of our participating shops. For the bike shops, involvement in the project has given them the opportunity to test new markets, including bike types and manufacturers that would not otherwise have been considered. New industry contacts were developed and new customer segments established.

The bicycle library opened again in March 2020 with tweaks to the booking system, additional lending periods, and several more bicycles. Additional types include a three-wheeled electric bike for those who struggle to balance a two-wheeled bike, and electric scooters similar to those hired out in larger cities (but generally lacking in smaller cities like Växjö). Two trailers for transporting smaller children were also added.

Strategies for turning the bicycle library into a permanent and more self-sufficient service beyond EU financing are being investigated, including a fee structure for lenders (refunded with the purchase of a bike) and the possibilities of bicycle-pool spin-offs for housing complexes and neighbourhoods.

The bicycle library is helping Växjö to grow into a cycling city, and results and experiences from the project will be reflected in the municipality’s new transport plan to be published in 2021.